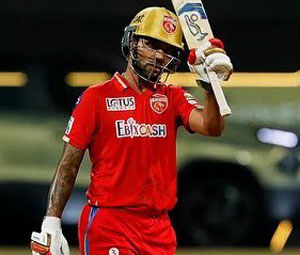 Mumbai : Chennai almost pulled it off and a big reason for that is the knock Ambati Rayudu played. Rayudu single-handedly dragged them back into the game and put them in a winning position. MS Dhoni and Ravindra Jadeja hit a few lusty blows but in the end, it was a bridge too far. Chennai have now lost six out of their eight games and need a miracle to make it through to the playoffs. The top order failed miserably but Ruturaj Gaikwad showed some form which is a positive sign for them.

Shikhar Dhawan, Player of the Match, said, ‘ The process, I always talk about it, I focus on it. About my fitness, my approach – I keep working on those skills. Results will take care of itself. The wicket was stopping a bit, I tried to go for the big shots, but I couldn’t connect. But I kept my calm. Once I get set, I can get those boundaries, that’s what I bank on. While batting first it’s about putting pressure on the bowlers and getting boundaries. We don’t have to lose too many wickets, that was our conscious effort. I have become a senior in the team (laughs), I give a lot of input to the players and my captain, on the field. The youngsters think a lot, sometimes they overthink, so I try to communicate with them. I talk about the law of attraction and how to achieve big in life.’

Mayank Agarwal said, ‘We would like to win a few tosses, we have just won one. I thought Arsh bowled exceedingly well, he has bowled the tough overs, he has been great for us. Even Rabada bowled well, to get Ruturaj and get Rayudu at that stage. These two have been great for us. As a team we have to be think about being smart. You want your opposition to play towards the longer side as much as they can. As a batter even if you mishit the balls, you’ll get the result against the shorter boundary. Those moments get the better out of you. It is important to carry the momentum. We have won one, but we need to win two or three on the bounce.’

Ravindra Jadeja said, ‘We started off very well, we felt we gave away 10-15 runs extra at the end. We did not execute our plans very well. He [Rayudu] was batting brilliantly, throughout but as I said earlier, if we could’ve restricted them to under 175 it would’ve been good. We are not getting good starts in the first 6 overs, that’s where we are lacking and hopefully we will come back stronger.’

Kagiso Rabada, said, ‘In the powerplay we were behind the rate. Must tell you, Shikhar and Mayank, the way they held their nerve and then Shikhar and Bhanuka the way they set it up was unbelievable. Livingstone the way he played some gentle strokes out of the park, that set us up nicely and we got a winning total. Each and every individual in our bowling line up put our hand up. Arsh (Arshdeep) has been the best death bowler in the comp, that’s what the stats say. He has got a lot of talent, drive and ambition.

And he is just a good bloke. So nice to have him around. I know I am going to bowl at the death. Arsh has been magnificent. He has been leading the way in that discipline. Everyone else knows their roles. Rahul is a key spinner for us. Sandeep has experience and got us a key wicket in the powerplay. Rishi put his hand up in the final over. I don’t think I have left out anyone (smiles). I think we bowled really well. Still a bit nerve wracking when you are bowling at MS Dhoni and there is not one red shirt in the crowd, only yellow shirts chanting his name. He held his nerve, credit to him.’