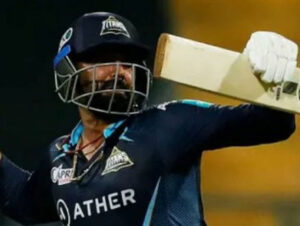 Gujarat Titans Rahul Tewatia said that in every match of the franchise, an individual player has always stood out and it is good for the team in tough circumstances, players take responsibility to win the games for their side.

Looking at our games, every game had an individual player who stood out. It is not like we are dependent on one to three players. In the first match against Lucknow Super Giants, it was me and Miller (David Miller), then next time it was Abhinav Manohar, then Lockie Ferguson bowled well and finally, there was David Miller who finished a match.

This is a team game, team matters more. We are happy that there is always someone who ends up being a part of tough times and takes the responsibility, said Tewatia.

The attacking left-handed batter, who has finished some matches for his side and during his stint with Rajasthan Royals said regarding his ‘match-finisher’ image that winning matches brings responsibilities and it feels great to have responsibilities coming his way.

On facing and hitting West Indies bowlers like Sheldon Cottrell and Odean Smith for sixes, the all-rounder said that he does not look at who the bowlers are, but rather puts all his attention on seeing the ball and hitting it.

The atmosphere is so comfortable and everyone gets treated equally. Even on the field, we do not see who is batting or bowling, we just focus on giving our best as a team.

Meanwhile, left-arm pacer Yash Dayal, who also plays for Gujarat Titans said that the head coach Ashish Nehra has had a big role in guiding him.

He keeps guiding me. I am gaining my rhythm, which is good. He is very supportive. He has been beneficial to me. I have learned a lot of things that I did not know earlier. He wants me to progress and it is having a positive effect on me, he added. On his experiences while bowling to big players on a stage as big as IPL, Dayal said that the margin of error is very less in the league.

You have to focus on every ball. The efforts is more, the mind works more. Being proactive is important and I am gaining experience, which is good for me, he added. The bowler remarked that his planning is just as it was during his domestic cricket days, to bowl his best ball. On his chances to make it to India national team, Dayal said that he is attempting to reach that level as soon as possible.

Coming to the franchise, the Titans are presently at the top of the points tally with 12 points in 7 games. They will take on Sunrisers Hyderabad today.