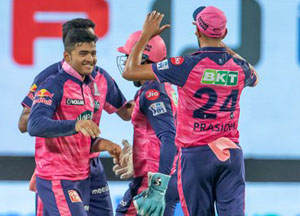 Rajasthan Royals beat Royal Challengers Bangalore by 29 runs in their Indian Premier League match here on Tuesday. The Royals posted 144 for 8 after being asked to bat with Riyan Parag top-scoring with 56 not out off 31 balls while captain Sanju Samson contributed 27. They then shot RCB out for 115 in 19.3 overs.

Faf du Plessis top-scored for RCB with 23 and that showed the insipid batting display of his side. Kuldeep Sen took four wickets for 20 runs while Ravichandran Ashwin got three. Prasidh Krishna got two wickets.

Riyan Parag, MoM, said, ‘ A bit of satisfaction. The Royals have shown faith in me for the last three years, and I am paying them back bit by bit. I love pressure and I am just showcasing my abilities. During the time-out, Sanga came out and we agreed that 140 was a good total on this wicket. We decided to go big in the last two overs. I wanted to target Hasaranga in his second over, but we lost wickets, and so I had to strategize and go after Hazlewood and Harshal.’

Sanju Samson said, ‘It is a really great win. After the start in the first 15 overs, we had real belief and trust in someone called Riyan Parag. We have been backing him for the last three-four years and he just showed it to the world today. I thought we were 10-15 runs short with no dew in the second innings. The pitch was turning and was two-paced, so 150-160 would have been a good total. It was something we were waiting for, for the back end of our batting to win us matches.

Almost everyone has put up a match-winning performance so far. The chat we had just before the second innings, was that when you are chasing 200 there is only one gear. But for such totals like 150, it was only a matter of putting pressure as the batsmen had to change gears. The dressing room atmosphere is really important. We make a couple of changes according to the wicket and the opponent, but the communication is very important. Karun, for example, was left out just because we needed that one over from Daryl Mitchell, and he understands that, and he can come back in later.’

Faf du Plessis, said, ‘It’s pretty similar to the previous game we played, there is a little bit of inconsistent bounce. We gave 20 runs too many and the dropped catch cost us 25. 140 was a par score on that pitch. That’s the thing we need to fix [the top-order batting]. The basics of the game doesn’t change. You needed someone in the top four to bat through and we have not done it. We have to try to change the batting order and see if that works. We have to try and play positively.

That’s what we discussed after the last game, trying to get the best out of him [on Kohli]. Great players go through these things. Great players go through phases like this. We wanted him to get in straightaway so that he doesn’t sit on the sidelines and think about the game. He is a great player and we still back him to turn it around and hopefully it’s around the corner. It’s a game of confidence.’