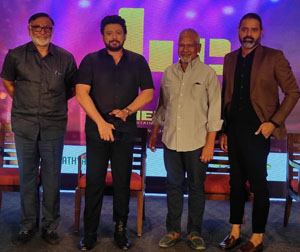 When asked about how a software might intrude on the artistic properties of making a film, he said, ‘Films aren’t completely the works of art as it also involves other aspects like commerce, coordination and man-management.

I don’t think a single film in the world is made without using multiple software. They are essential and software becoming an end-to-end means is definitely a breakthrough for the industry. While it doesn’t mean that the usage of software will make my films better, they aid in making the process efficient.’

This innovative technology is certain to create a revolution in filmmaking, he said.

‘I was so impressed with this software that I decided to demonstrate it by using this technology in my film production, said T.G.Thyagarajan, Secretary of South Indian Film Commerce
Honey Flicks is expected to be rapidly adopted by the Tamil industry followed by all Pan India film production companies.

Honey Flicks is a new way for filmmakers, production companies, and agencies to streamline their production management workflow.

This is a web and mobile based software with a suite of integrated products-from managing talent and crew details creating shooting schedules, archiving documents and media in the cloud, to creating, sending, and tracking mobile-friendly call sheets.

Honey Flicks enquiry registration can be done by visiting www.honeyflicks.com