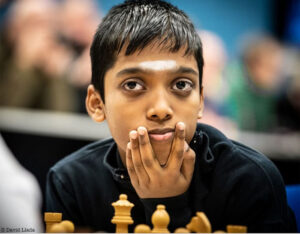 The win in the 15th and final round of the preliminaries late on Sunday saw the teenage GM knock Gujrathi out of contention. The 16-year-old Praggnanandhaa will take on Wei Yi of China in the quarterfinals. Praggnanandhaa, who created a stir by beating world No.1 Magnus Carlsen of Norway earlier in the sixth round, scored 25 points to finish fourth behind Anish Giri (the Netherlands, 29 points), Carlsen (28 points) and Ding Liren (China, 25 points).

He had beaten the Norwegian in an online tournament a few months ago for the first time. The two other Indian players, P Harikrishna and Gujrathi in the 16-player field, finished outside the top 8 and failed to cut the knockout bracket. While the experienced Harikrishna took ninth place with 18 points, Gujrathi (17 points) ended up 11th.

Praggnanandhaa scored an impressive win over American Abhimanyu Mishra, the world’s youngest Grandmaster, in 41 moves before settling for a draw against another US player Sam Shankland in rounds 13 and 14 respectively. In the game against Gujrathi, the teenage GM capitalized on an error on the 35th move to force a win.

Fast-improving Dutch GM Jorden Van Foreest and Eric Hansen were among Praggnanandhaa’s other scalps in the preliminary rounds. He finished with eight wins, four defeats, and three draws.