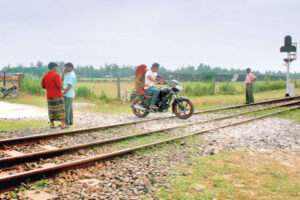 Chennai : The Southern Railway has announced that it has completely eliminated unmanned level crossings in Tamilnadu giving more thrust on safety. Southern Railway sources said Railways accord paramount importance to the safety of train operations as it is crucial for the safety of rail passengers as well as road users who come in contact with railway lines. In order to facilitate uninterrupted and safe movement of both rail and road traffic in the areas of rail-road interface, Railways, in coordination with civic authorities construct Road Over Bridges(ROB), Road Under Bridges (RUB) and Limited Use Subways (LUS).  ROBs, RUBs and LUS enhance the safety of train
operations, besides improving the speed of trains.

During the eight year period from 2014 to 2022, 92 ROBs & RUBs have been commissioned in the state of Tamil Nadu. Focusing on curbing trespassing accidents involving road/rail commuters an  road vehicles at level crossings and enable smooth flow of road/rail traffic , Railways are eliminating Level Crossings on mission mode.  In lieu of Level Crossings, ROBs, RUBs and subways are constructed.