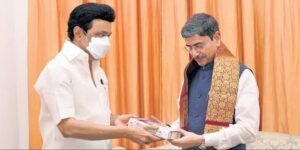 Chief Minister MK Stalin today called on Governor RN Ravi at the Raj Bhavan and sought him to give assent for pending Bills passed by the State Assembly.

It may be noted that much recently there is war of words between the State government and Governor on various issues including NEET, NEP,  language policy and appointment of Vice Chancellors.