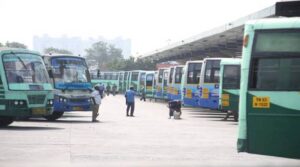 Chennai : The state transport department has decided to operate 325 additional buses from Chennai Mofussil Bus Terminus, Koyambedu this weekend. Official data shows the department through various state-owned transport corporations operates around 2,000 buses from CMBT, Koyambedu every day and close to one lakh people travel on them. But this seems to be inadequate this week due to two major reasons — continuous muhurthams (days considered auspicious for weddings) and parents returning to their hometowns after summer holidays as schools are all set to reopen next week. On Wednesday night, there was chaos at CMBT due to a bus shortage. “Passengers, particularly travelling to southern districts of Madurai, Thoothukudi and Tirunelveli etc, had to wait for at least two hours to get a bus,” said Parthiban, a stranded passenger at CMBT on Wednesday night. Some of the aggrieved commuters staged a protest as only State Express Transport Corporation (SETC) buses, which collect a higher fare compared to ordinary Tamil Nadu State Transport Corporation (TNSTC) buses, were operated beyond 9 pm. It took three past midnight for transport authorities to convince the crowd and clear the extra rush.
Tags:More buses to be operated from CMBT