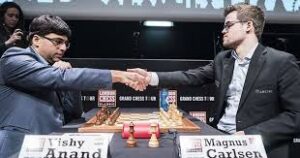 Indian chess ace Viswanathan Anand returned to winning ways, upstaging world No.1 Magnus Carlsen in the fifth round of the Classical section early on Monday (June 6) in the Norway Chess tournament to climb to the top spot.

After defeating the Norwegian superstar in the Blitz event that preceded the Classical section, Anand claimed the victory in a thrilling Armageddon (sudden death game) after the regular match ended in a 40-move draw.

In the Armageddon, the 52-year old Anand recreated magic of old when he stunned Carlsen to post a win in 50 moves. With 10 points in his kitty, the Indian GM leads the field with four more rounds to go in the prestigious tournament which features some of the best players in the sport.