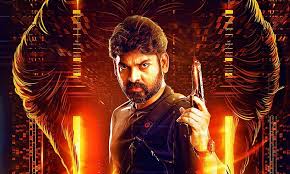 The poster shows Vemal holding a gun with an intense look. While the release date has not yet been announced, the poster says ‘coming soon’.