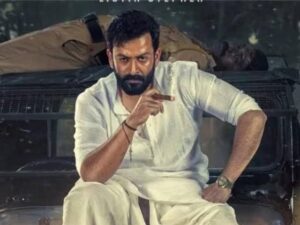 Actor Prithviraj’s next Kaduva is now set for release 7 July. To be out in different languages, the movie is directed by Shaji Kailash and bankrolled by Prithviraj along with Listin Joseph.

Team Kaduva comprising of Prithviraj, Vivek Oberoi, Samyuktha Menon among others were in Chennai to promote the movie recently.

Speaking on the occasion, Prithviraj said, ‘Though Malayalam cinema has carved a niche for itself, I thought there was no mass masala entertainer made in the last few years. It drove me to do Kaduva’.

He said, ‘Everything has fallen in place and the movie has come good’.

Asked about Pan India films, he said, ‘The cast, budget or promotions don’t decide a Pan India film. What you put in paper is important. Content is the key’.

Endorsing the same, Vivek Oberoi,, who plays a cop in Kadavu says, ‘Bollywood has gone on to do ‘Metro’ movies losing connect with larger audience. But films in Telugu, Kannada struck to it. Hence they toppled Hindi cinema’.

The movie has music by Jakes BejoyC, cinematography by Abinandhan Ramanujam and editing by Shameer Muhammed.