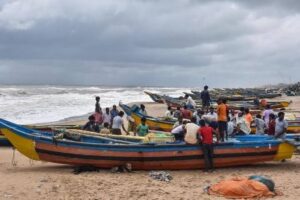 At least 12 Indian fishermen were arrested by the Sri Lankan Navy for allegedly poaching in the country’s territorial waters, an official said.

“The fishermen were arrested near Point Pedro,” Sri Lankan Navy spokesman Captain Indika de Silva said. He said the arrested fishermen were being brought to Myladi where they would be handed over to the fisheries directorate.

Recently, northern fisher leaders appealed to Tamil Nadu Chief Minister M.K. Stalin for a meeting, expressing keenness to hold discussions and amicably resolve the long-dragging conflict between fishermen on either side of the Palk Strait.