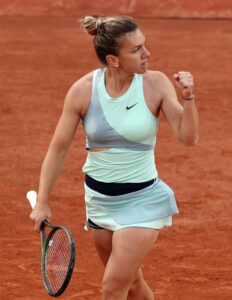 Former champion Simona Halep swept past fourth-seeded Paula Badosa to reach the Wimbledon quarter-finals for the fifth time on Monday. Halep won 6-1, 6-2 in just one hour as her Spanish opponent’s game fell apart with 21 unforced errors. The Romanian, who was champion in 2019, has yet to drop a set at the tournament.

Seeded 16 this year, she will face either Amanda Anisimova of the United States or France’s Harmony Tan for a place in the semi-finals.

But Australia’s Tomljanovic, ranked 44, levelled the match and broke four times in the decider to seal the win, setting up a quarter-final against Kazakhstan’s Elena Rybakina.

Harmony Tan’s dream run at Wimbledon — which started with a win against Serena Williams — came to an end on Monday when she lost her last-16 match against Amanda Anisimova 6-2, 6-3. The unseeded French player, who crushed British wild card Katie Boulter 6-1, 6-1 in the previous round, was no match for the American, who was not broken once. Anisimova raced into a 5-1 lead in the first set before being briefly held up by Tan, ranked 115 in the world.