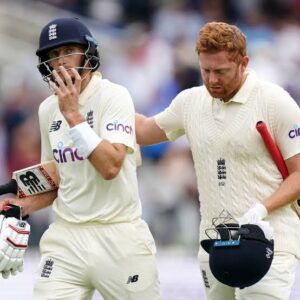 A 150-run stand between Jonny Bairstow and Joe Root helped turn things in favour of England at the end of the final session of Day Four of the ongoing fifth and final Test against India at Edgbaston in Birmingham on Monday. At the end of the day’s play, England’s score read 259/3, with Root (76*) and Bairstow (72*) standing tall.

Indians were left clueless by the determination and strokeplay of both in-form batters. England resumed things off after Tea at 107/1, with opener Alex Lees (56*) and Ollie Pope (0*) standing unbeaten at the crease.

India got an early wicket in the first over after Tea as Jasprit Bumrah sent back Pope to pavillion for a three-ball duck after wicketkeeper Rishabh Pant successfully caught the ball which hit the edge of his bat.

In the next over, Lees was run out by the pair of Mohammed Shami and Ravindra Jadeja. England lost their third wicket at a score of 109 runs. After this, the in-form duo of Joe Root and Jonny Bairstow resumed the chase for their side.

The duo formed a fifty-run partnership. Root-Bairstow continued to inflict punishment on Indian bowlers, suddenly shifting things more in England’s favour. A hundred-run stand was up between Bairstow and Root in 141 balls. Indian bowlers could find no answer to the batting of these two as they kept piling up runs. Both brought up their half-centuries and also completed their 150-run stand in 196 balls.