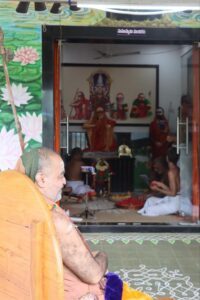 Kaveri Water in Kalasham was worshipped with Kaveri Ashtottaram and Shodashopachara Puja at the Mandir area near Goshala.

Vijayendra Saraswathi in his Anugraha Bhashanam spoke about venerating rivers.

He said in India rivers are worshipped as divine and spoke about the need to celebrate such festivals in other regions to inculcate national feeling and cultural oneness.

Earlier special lecture in Tamil by Ranganji on Godavari Mahatmyam was held to bring awareness on the Teertha Mahatmyam to southern devotees and Adi Perukku is an opportunity for Andhra devotees to know about the culture of Tamilnadu.

Details of special Naivedyams performed on the festival was shared with devotees. Later the Kalasha Teertham was given as Prasadam.