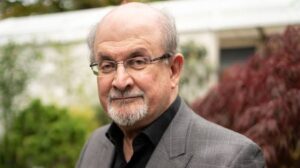 Salman Rushdie, the Indian-born novelist who was ordered killed by Iran in 1989 because of his writing, was attacked on stage at an event in New York and suffered an apparent stab wound to the neck, according to New York State Police and an eyewitness.
A man rushed to the stage at the Chautauqua Institution in western New York state and attacked Rushdie as he was being introduced, an eye witness said. A State Trooper present at the event took the attacker into custody, police said.
Rushdie was taken by helicopter to a hospital but his condition was not yet known, police said
“We are dealing with an emergency situation,” a Chautauqua Institution spokesperson said.