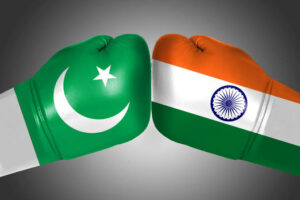 Pakistan Prime Minister Shehbaz Sharif has reiterated his country’s strong resolve to maintain peace in the region, but added that sustainable peace in South Asia was linked to the resolution of Jammu and Kashmir issue in line with the UN resolutions and the wishes of Kashmiris, and nothing short of it would work.
“We want permanent peace with India through dialogue as war is not an option for either of the countries,” The News quoted the premier as saying said while speaking to a group of students from the Harvard University.
Sharif pointed out that Islamabad and New Delhi should have competition in trade, economy and improving the conditions of their people.
Pakistan was not an aggressor, but its nuclear assets and the professionally trained army are deterrence, he said, adding: “We spend on our military to protect our frontiers and not for aggression,” The News reported.
The delegation consisted of students from diverse origins and academic backgrounds.

The Prime Minister welcomed students and held a candid discussion about contemporary challenges Pakistan was facing today.
In response to a question about the national economy and the IMF programme, the premier said that Pakistan’s economic crisis stem from structural problems along with political instability in the recent decades.
He said the first few decades since the inception of Pakistan witnessed impressive growth across all sectors of the economy when there were plans, national will and the implementation mechanism to produce outcomes.
“Overtime, we lost the edge in sectors in which we were ahead. The lack of focus, energy and policy action led to reduction in national productivity.”