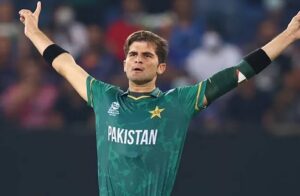 Pakistan’s lead pacer Shaheen Shah Afridi was  ruled out of the upcoming Asia Cup and the home series against England with a knee injury, dealing a massive blow to the team’s prospects.
The Pakistan Cricket Board (PCB) said Shaheen has been advised four-six weeks rest by its medical advisory committee and independent specialists following scans.
The board said that while Shaheen has been ruled out of the T20 Asia Cup and the seven-match T20 home series against England, he is expected to return to competitive cricket in October with the New Zealand tri-series, which will be followed by the ICC T20 World Cup in Australia.