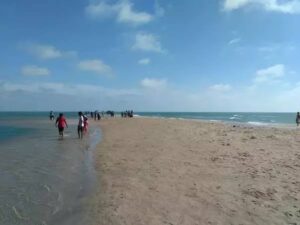 Eight Sri Lankan people including three males, two females, two male children and a female child came to Dhanushkodi as refugees today early morning at 2 am, police said. The three families came from Jaffna, Talaimannar and Trincomalee, reported Q Branch Police.
The Q Branch is one of the CID (Criminal Investigation Department) wings of the Tamil Nadu police. The probe is underway and the Coastal Security Group Police is investigating the matter. Dhanushkodi is an abandoned town at the south-eastern tip of Pamban Island of the state of Tamil Nadu in India. It is south-east of Pamban and is about 24 kilometres west of Talaimannar in Sri Lanka.
The economic crisis in Sri Lanka has triggered an exodus. They are economic refugees, trying to escape a dire situation in Sri Lanka, which is reeling under a severe economic crisis. Earlier in March, three Sri Lankan Tamils were booked under various sections of the Indian Passport Rule and the Foreigners Act and remanded in custody following a Rameshwaram court order.
Tamils who have no way to survive due to the shortage of food, and high inflation following the economic crisis in Sri Lanka are preparing to leave the island nation and enter India as refugees. Notably, Sri Lanka has been facing the worst economic crisis since independence in 1948, leading to an acute shortage of essential items like food, medicine, cooking gas and fuel across the island nation.
The nearly-bankrupt country, with an acute foreign currency crisis that resulted in foreign debt default, had announced in April that it is suspending nearly USD 7 billion foreign debt repayment due for this year out of about USD 25 billion due through 2026.
Sri Lanka’s total foreign debt. The economic crisis has particularly impacted food security, agriculture, livelihoods, and access to health services. Food production in the last harvest season was 40 – 50 per cent lower than last year, and the current agricultural season is at risk, with seeds, fertilizers, fuel and credit shortages.