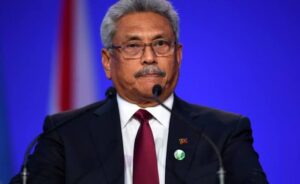 Sri Lanka’s former President Gotabaya Rajapaksa is all set to return to Sri Lanka in the first week of September, days after fleeing to Thailand.
Rajapaksa is likely to return either on September 2 or 3, Daily Mirror reported citing a source. Rajapaksa fled Sri Lanka in the early hours of July 13 after massive protests erupted in Colombo and demonstrators angry with the country’s economic crisis stormed his official residence and office.
He resigned as president after reaching Singapore, where he was issued a 14-day visit pass. On August 11, the former President reached Thailand following a request from the Sri Lankan government. Tight security has been provided to his Mirihana residence.
However, Thailand has denied reports that the former Sri Lankan President has sought asylum in the country. The Thailand Foreign Ministry said it received a request from Rajapaksa to visit the country with no intention of seeking political asylum.
Earlier, the Sri Lanka Podujana Peramuna (SLPP) requested President Ranil Wickremesinghe to make arrangements for the former president to return. Subsequently, the president is reported to have contacted Rajapaksa to discuss arrangements for his return to the country.
Gotabaya’s brother Mahinda Rajapaksa led-SLPP put forward the demand in a meeting with the incumbent President Ranil Wickremesinghe today and requested the President to ensure Gotabaya Rajapaksa is given safe passage into Sri Lanka, Colombo Gazette reported.
Meanwhile, the national organizer of SLPP and former Finance Minister Basil Rajapaksa assured President Wickremesinghe of the fullest support of the SLPP to address the current crisis in the country. Earlier, Former Sri Lankan Ambassador to Russia, Udayanga Weeratunga, who is also related to Gotabaya, hinted that Rajapaksa will return to the country on August 24, the Daily Mirror said.
Thailand would be the second Southeast Asian country after the Maldives that Rajapaksa was seeking temporary shelter in after fleeing his island nation last month amid mass protests.
Sri Lankan Parliament Speaker Mahinda Yapa Abeywardena announced the official resignation of Rajapaksa on July 15. After the resignation of Gotabaya Rajapaksa, Ranil Wickremesinghe was sworn in as President of Sri Lanka on July 21 in Parliament.