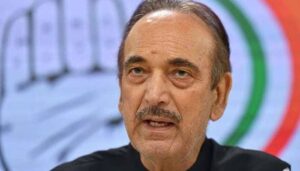 Veteran Congress leader Ghulam Nabi Azad on Friday resigned from all posts of the party, including the primary leadership, sending a five-page note to party interim president Sonia Gandhi where he recounted his long association with the party and his close relationship with Indira Gandhi. The situation in the Congress party has reached a point of ‘no return’, Ghulam Nabi Azad wrote in his detailed resignation letter, days after he resigned from the organisational post of Jammu and Kashmir citing health issues.
“The entire organisational election process is a farce and a sham. At no place anywhere in the country have elections been held at any level of the organisation. Handpicked lieutenants of the AICC has been coerced to sign on lists prepared by the coterie that runs the AICC sitting in 24 Akbar Road,” Azad wrote.
Without mincing any word, Ghulam Nabi Azad attacked Rahul Gandhi and said the party at the national level conceded to the BJP and regional parties in the state level. “This all happened because the leadership in the past 08 years has tried to foist a non-serious individual at the helm of the party.
‘Rahul Gandhi insulted all senior party members’
Azad said the situation has only worsened since the 2019 elections after Rahul Gandhi stepped down in a huff and not before insulting all the senior party functionaries who have given their lives to the party. The remote control model that destroyed the UPA got applied to Congress, Azad wrote.
“While you are just a nominal figurehead, all important decisions were being taken by Shri Rahul Gandhi or rather worse his security guards and PAs,” he wrote.