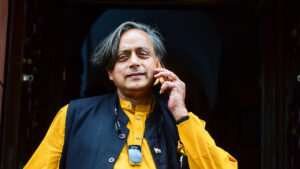 Congress MP Shashi Tharoor on Tuesday said that an election will be good for the party while refusing to comment on whether he will run for the post of the Congress president after his recent article in a Malayalam daily triggered speculation that the former Union minister could contest.
“No comment to make. I accept what I’ve written in my article which is that an election would be a good thing for the Congress party”, Tharoor told reporters here when asked whether he will contest Party’s presidential poll The MP from Thiruvananthapuram also welcomed elections in the party and said that Rahul Gandhi’s refusal to be appointed as the Congress President was disappointing.
According to him, the grand old party should not be limited by the belief that only one family can lead it.
Tharoor had penned an article in Malayalam daily Mathrubhumi saying that the party polls were the first step towards rejuvenation of the organisation.