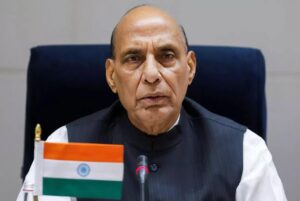 India is no longer weak and has become the most powerful country in the world, Defence Minister Rajnath Singh said here on Tuesday.
Speaking after unveiling a statue of Panna Dai, a 16th-century nursemaid, the Defence Minister also said that the Russia-Ukraine war was stopped for a few hours at the behest of Prime Minister Narendra Modi and hence the government could bring back over 22,000 Indian students from the war-torn region.
“Such an incident will never be repeated in the future,” he said after unveiling the 9.6 feet tall statue.
Panna Dai is known sacrificing her son to safeguard the future of Mewar in Rajasthan. When Mewar scion Udai Singh was left in her care after Rani Karnavati committed ‘Jauhar’ in 1535, he was attacked by his uncle Banvir. It was Panna Dai who sacrificed her own son’s life to save Udai Singh.