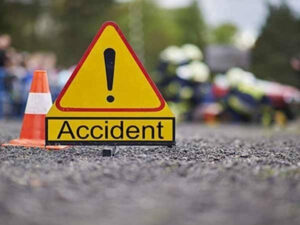 Two men were electrocuted and 3 others sustained injuries when a huge decorated wooden car (chapparam) used in the Ganesh immersion procession, came into contact with an overhead power cable while the chariot was being negotiated to its position, near Rajapalayam in Virudhunagar, district Collector J Meghanatha Reddy said on Thursday. Confirming the incident, the Collector said the mishap occurred around 10.30 PM on Wednesday when the chapparam was being brought to its stand after the idol of Lord Ganesh was immersed. “Unfortunately, two persons died and three others sustained injuries due to electrocution when the chariot came into contact with a live overhead cable, Reddy said.
The villagers of Chokkanathanputhur near Rajapalayam in Tamil Nadu’s Virudhunagar district, about 520 km from here, took out a procession on the night of Ganesh Chathurthi and immersed the idol in a nearby lake. After the visarjan ceremony, the chariot was brought back to the village to be mounted on its stand when the incident occurred. S Munishwaran (24) and K Marimuthu (23) died while the injured Selva Ganesh, Selvapandi and Muppidathi are undergoing treatment at the government hospital in the district.