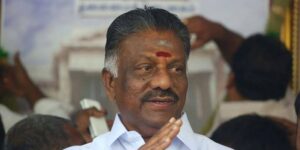 AIADMK coordinator and former Chief Minister O Panneerselvam urged the Centre to prevail upon the Sri Lanka government for the immediate release of all the fishermen, who were arrested by the Lankan navy. ‘I am at a loss of words to convey my deep anguish and pain over the continued and repeated instances of apprehension and captivity of a large number of fishermen from Tamil Nadu and their fishing boats by the Sri Lankan navy causing untold hardship to the fishermen and their families, he said in a letter to Union Minster of External Affairs Dr. S Jaishankar on Wednesday. Pointing that he had already written a similar letter to the union minister bringing his notice of the apprehension of 19 fishermen of Tamil Nadu by the Sri Lankan navy, Panneerselvam said within a week one further incident occurred on August 27 in which six fishermen of Rameswaram were arrested by the Lankan navy while fishing in their traditional waters on the ground of alleged crossing of international maritime boundary line.
Tags:Ops fishermen release