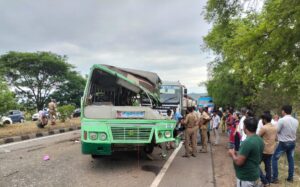 One person was killed and ten were grievously injured in an accident involving a bus and a lorry on Friday early morning in Tamil Nadu. The accident occurred at Veerasikampatti near Dindigul.The lorry driver, S. Madasamy died on the spot. Dindigul police said that the bus was travelling towards Cumbum from Chennai and the front portion of the bus and the lorry were ripped apart.The body of Madasamy was retrieved by the Fire and Rescue Personnel who rushed to the spot. The injured were shifted to the Dindigul Government Medical College Hospital.Bus driver, Mani was also grievously injured in the accident and he was also shifted to Dindigul Government Medical College Hospital.