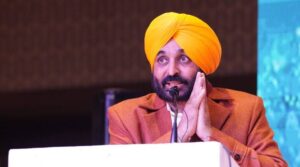 Punjab Chief Minister Bhagwant Mann was deplaned in Frankfurt for Delhi-bound Lufthansa flight as he was “too drunk to walk”.
As per media reports, Mann, who was on a trip to Germany from September 11-18, delayed his departure as he was reportedly in ‘an inebriated state’.
However, his party, Aam Aadmi Party (AAP), has strongly denied the rumours, saying Mann was not deplaned at the Frankfurt airport. The party termed it false and frivolous propaganda by political rivals.
A co-passenger in a message said, “the CM was not steady on his feet as he had imbibed excessive alcohol n had to be supported by his wife/security”.
“Our political opponents are spreading these rumours to defame our CM. They cannot digest that CM Mann is working hard to get investment in Punjab. The CM returned as per schedule,” party Chief Spokesperson Malwinder Singh Kang told the media.