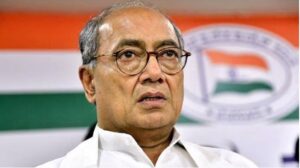 Congress’ Rajya Sabha MP Digvijaya Singh on Friday said he is not in the race for the post of the party president.“I have already said… and I am reiterating that I am not interested in becoming the party’s national president,” the former Madhya Pradesh Chief Minister told reporters.The senior Congress leader made the remarks while interacting with the media persons during his visit to Jabalpur.Singh’s statement has come a day after he visited the party headquarters in Delhi.He had also participated in “Bharat Jodo Yatra” with former Congress chief Rahul Gandhi and other party leaders in the southern part of the country.On Friday, he joined a tribute gathering for “Shankaracharya” – Swami Swaroopanand Saraswati, who breathed last at his Ashram in Madhya Pradesh’s Narsinghpur district on September 11. Hundreds of seers from different religious places came to attend “tribute sabha”.On his was on his way to Narsinghpur, he interacted with reporters and responded to queries about Congress’ party presidential elections and contestants in the race for the highest post in the party.