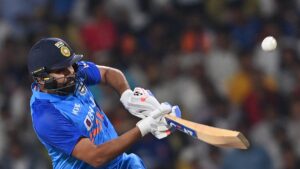 Chasing a target of 91, Rohit Sharma’s unbeaten 46 steered India to a six-wicket win the second T20I at the VCA Stadium in Nagpur. Rohit dealt in boundaries as India levelled the series with four balls to spare. Earlier, Adam Zampa struck thrice in two overs, dismissing KL Rahul, Virat Kohli and Suryakumar Yadav, respectively. The pair collected 20 runs in the first over, which was bowled by Josh Hazlewood. Earlier, Matthew Wade’s power-hitting steered Australia to 90 for five in a rain-hit match at the VCA Stadium in Nagpur.

Aaron Finch, Australia captain, said, You probably plan for a 5 over game and then a bit more to it. Rohit played brilliantly and two overs of Axar made the difference. Wade is a calm customer at the back end and he has grown into that finisher’s role. Zampa was good too.
Rohit Sharma, man of the match, said, I was quite surprised as well actually. Didn’t expect to hit it like that, glad it came off. For the last 8-9 months I have been playing like that. You can’t really plan too much is such a shortened game. The bowlers had something to bowl to and we bowled well. The dew started coming in later, which is why we saw a few full tosses from Harshal. Coming back after a couple of months, the back injury can be tricky. I am not going to talk too much about how he bowled. Got us the crucial wicket. As a team we are not going to analyse too much. Just want him to come and enjoy. Axar can bowl in any stage, gives me an advantage of using the other bowlers in different situations too – maybe use the pacers in the middle overs if he bowls in the powerplay. I would like to see his batting as well. Glad DK could finish well. Been a while since he had some time in the middle. There was this thought if we should get Rishabh in but I thought Sams is going to bowl off-cutters, so I thought let DK come in and he is playing that role anyway for us. Groundsmen have been here since 1.30 pm to get the outfield ready.