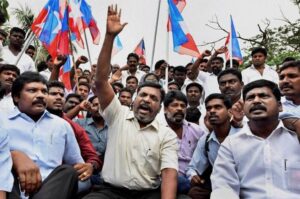 Chennai : Viduthalai Chiruthaigal Katchi (VCK), would conduct protest marches against the arrest of Popular Front of India (PFI) leaders by the National Investigating Agency (NIA) and Enforcement Directorate (ED), the party said in a statement.VCK founder leader and Member of Parliament, Thol Thirumavalavan in a statement on Friday said that the Popular Front of India was a transparent social movement. The arrest of senior leaders of the PFI and the raids conducted at its offices across the country were condemnable.He said that the party will conduct protest marches against the action taken on PFI.The VCK leader said that ever since Narendra Modi assumed office as Prime Minister, there has been a move against the Popular Front of India (PFI). He said that PFI and its political arm Social Democratic Party of India (SDPI) were working for the upliftment of the poor and downtrodden in society.Thol Thiruvamavalavan said that while most of the leaders of PFI were Muslims, non-Muslims were also in the leadership of the organisation.