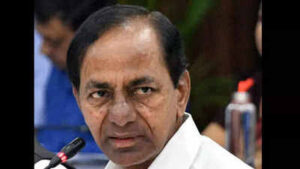 Seeking to expand its electoral footprint beyond Telangana, the ruling Telangana Rashtra Samithi (TRS) on Wednesday changed its name to Bharat Rashtra Samithi (BRS).
Over two decades after the founding of the party with the objective of carving out a separate Telangana from Andhra Pradesh, the party adopted a unanimous resolution at its general body meeting here, rechristening it as BRS.
Now, the goal is to take on the BJP and emerge as a national force to reckon with, bringing together like-minded parties.
In the presence of JD(S) leader H D Kumaraswamy, Tamil Nadu’s VCK leader Thol Thirumavalavan, TRS president and Chief Minister K Chandrasekhar Rao proposed the name change resolution and it was unanimously passed at the meeting.