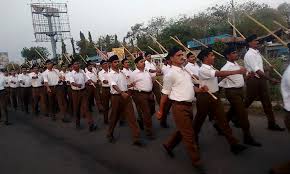 Chennai: The Rashtriya Swayamsevak Sangh (RSS) has decided to postpone its scheduled route marches and other events scheduled for November 6 and appeal against a single judge order of the Madras High Court granting permission for the events with conditions.

A Sangh source on Saturday confirmed that the organisation has decided to postpone the route marches and public meetings, which were allowed by the High Court to be held in 44 locations across Tamil Nadu, as against the 50 it wanted to.

The single judge bench of Justice G K Ilanthiraiyan had on Friday permitted the RSS to take out route marches and hold public meetings at 44 places in Tamil Nadu on November 6 subject to certain conditions.

One of them stipulated that the procession and public meetings should be conducted on premises such as grounds or stadium.

The judge said the rally cannot be allowed at six places where the situation is not conducive — Coimbatore, Mettupalayam and Pollachi; Palladam in Tiruppur district, Arumanai in Kanniyakumari and Nagercoil.