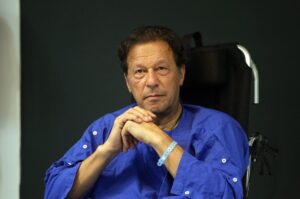 Pakistan’s Interior Minister Rana Sanaullah has accused Imran Khan of ”committing the crime of treason against the state,” and exhorted institutions like the judiciary to stand up against the former premier’s ”wretched agenda.”Speaking during Geo News’ program ”Naya Pakistan” on Sunday, Sanaullah said, ”Khan only has one demand: he wants to be adopted by the institutions to make him sit on the prime minister’s chair.” ”Institutions, government, Parliament, and the judiciary should stand against his wretched agenda,” he said, adding that Khan will never be successful in his agenda against the country and the nation.Sanaullah accused the 70-year-old Pakistan Tehreek-e-Insaf (PTI) party chief of ”committing the crime of treason against the state,” the report said.The minister said the cricketer-turned-politician should avoid talking about something if it isn’t true, but he does so because it ”strengthens his political agenda”, it said.Sanaullah reiterated that Khan wants to make the Pakistan Army chief’s appointment controversial while maintaining that Khan ”doesn’t even care about his self-respect,” it said.