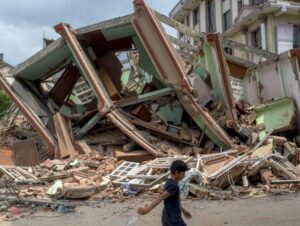 An earthquake of magnitude 6.6 hit Nepal in the early hours of Wednesday. The death toll due to the earthquake is at least 6 people as per ANI. Moreover, 5 people were injured and have been taken to hospital. Owing to the strong earthquake, dozens of houses were damaged by landslides at various locations across the district. According to the National Seismological Center (NSC) of Nepal, the far-west region of Nepal witnessed three tremors – 2 earthquakes and 1 aftershock. It was the third jolt that led to the loss of lives after a house collapsed.The first quake of 5.7 magnitude was recorded at 9:07 PM (Local Time) on Tuesday followed by another at 9:56 PM (Local Time) measuring 4.1 magnitudes.