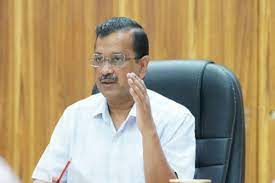 The Bharatiya Janata Party (BJP) on Tuesday demanded a lie detector test for Delhi Chief Minister Arvind Kejriwal after conman Sukesh Chandrashekhar claimed that he was forced to bribe the Aam Aadmi Party (AAP). In a series of letters, Chandrashekhar has alleged that he paid money to Delhi minister Satyender Jain and other AAP leaders for protection in jail and a Rajya Sabha ticket from the party. In one of his letters, Chandrashekhar, who is lodged in Mandoli Jail in Delhi, alleged that he met Kejriwal and was asked to arrange Rs 500 crore for the party’s expansion into the southern states.”The allegations by Chandrashekhar were earlier against AAP ministers and leaders but now he has directly charged Kejriwal, who needs to answer the questions being asked,” BJP MP Manoj Tiwari said at a press conference.”The BJP demands that Arvind Kejriwal, Satyendra Jain and Sukesh Chandrasekhar undergo a lie detector test and it should be televised live,” he added.