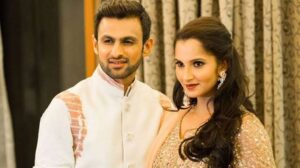 Rumours are rife that Tennis superstar Sania Mirza and her husband Shoaib Malik have parted ways.
Pakistani Cricketer Shoaib Malik and Indian Tennis Star Sania Mirza have allegedly ended their 12-year-long marriage and are co-parenting their son Izhaan Mirza Malik.
According to Pakistani news outlet Samaa TV, Shoaib reportedly cheated on Sania. Neither Sania nor Shoaib has made any announcement in this regard.
Interestingly, Shoaib and Sania are still following each other on Instagram. However, Sania’s cryptic posts, captions and stories added fuel to the divorce rumors. Recently, Sania posted a photo with her son and wrote, “The moments that get me through the hardest days @izhaan.mirzamalik.”
She also posted an Instagram story a couple of days ago that read, “Where do broken hearts go?”
Shoaib also shared pictures from the birthday party, but Sania didn’t. Another interesting detail that has the fans concerned is Shoaib’s recent appearance on the Pakistani Cricket show ‘Ask the Pavillion’ where he was asked about the location of Sania’s tennis academies.
Shoaib replied by saying that he doesn’t know much about the academies. Shoaib’s response surprised Waqar Younis and he jokingly said, “what sort of husband you are?” Shoaib and Sania got married in 2010 and have been staying in Dubai ever since.