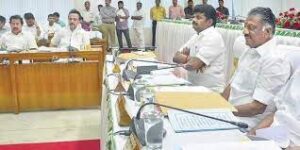 Speaking on the occasion, Stalin said that the reservation is not for the poor people.

The DMK government will not block any scheme for the poor. Most of the government’s schemes have been created keeping the poor people in mind. We will support any scheme brought by the central government to alleviate the poverty of the poor people. Are those who earn Rs.60,000 a month poor? It is not a reservation for poor people belonging to advanced society, he added.

Interestingly, the Congress MPs and leaders from Tamilnadu are at loggerheads with the party central leadership over the Supreme Court judgement upholding 10 per cent quota for economically weaker sections. While the leadership at Delhi welcomed EWS judgement, the local leaders opposed ut. They even took part in today’s meeting chaired by Chief Minister.