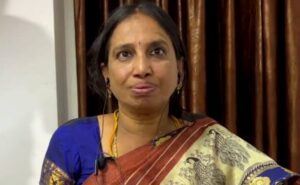 Nalini Sriharan, a convict in the assassination of former Prime Minister Rajiv Gandhi, on Tuesday appealed to the Central and Tamil Nadu governments to release the four Sri Lankan nationals who were recently released from jail and sent to the special camp in Tamil Nadu’s Trichy.
Nalini also distanced herself from the Rajiv Gandhi assassination case and said that she can’t accept that she was named in the case.
“I appeal to state and central governments to release four Sri Lankan nationals, locked in Trichy special camp- including my husband. Despite being released from prison, this special camp is like a prison again,” she said while speaking to the media.
Santhan, Murugan, Robert Payas and Jayakumar have been kept in a special camp for foreigners in Trichy after they were released from prison in the Rajiv Gandhi assassination case.
Murugan’s wife Nalini and Jayakumar’s wife Shanthi met them in person today in Trichy. Calling herself a “Congress family”, Nalini claimed that they were distressed after the assassination of former Prime Ministers Indira Gandhi and Rajiv Gandhi.
“Some people oppose our release. We’re a Cong family. When Indira Gandhi and Rajiv Gandhi were assassinated, our family was sad and didn’t eat. I can’t accept I was named in Rajiv Gandhi’s assassination. I should be free of that blame,” she said adding that they don’t know who assassinated Rajiv Gandhi.