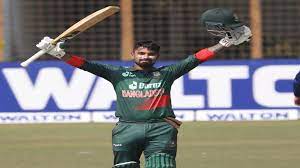 The Bangladesh Cricket Board (BCB) on Friday announced that wicketkeeper-batter Litton Kumer Das will be leading the team in the upcoming ODI series against India, starting from Sunday.Litton, 28, made his ODI debut against India in 2015. The right-handed batter has made 1835 runs in 57 ODIs till now. He steps in for Tamim Iqbal, their regular skipper and leading run-getter in the format, who has been ruled out of the series against India after suffering a grade-one groin strain in training on Wednesday.”Liton is one of the more experienced players in the side and has demonstrated leadership qualities. He has a sharp cricketing mind and reads the game well,” Jalal Yunus, BCB cricket operation committee chairman was quoted as saying in an official release.This will be the first time Das will be captaining Bangladesh in an ODI series and will become their 15th captain in the 50-over format. He had earlier led Bangladesh in the shortest format of the game against New Zealand in 2021 after Mahmudullah was injured. In 2022, he has scored 1,703 in 43 innings across all formats of the international game.”It is most unfortunate to lose Tamim to injury for this very important series, especially because under his captaincy the team has played some outstanding cricket in the last couple of years and he has been our most prolific batsman in this format. He will be missed but we also feel that Liton has the attributes to do a good job as captain,” he added.The first two ODI matches between Bangladesh and India will take place on December 4 and 7 at the Sher-e-Bangla National Cricket Stadium (SBNCS) in Mirpur, Dhaka. The third ODI, which was previously scheduled to be held at Dhaka, will now take place at the Zahur Ahmed Chowdhury Stadium (ZACS) in Chattogram on December 10.All the ODI matches, which are not a part of the ODI World Cup Super League, will be day-night affairs starting from 12 pm local time. The tour will also have two Tests under the ICC World Test Championship cycle, at the Zahur Ahmed Chowdhury Stadium (ZACS) in Chattogram from December 14 to 18, and then at the Sher-e-Bangla National Cricket Stadium (SBNCS), Mirpur, Dhaka from December 22-26.