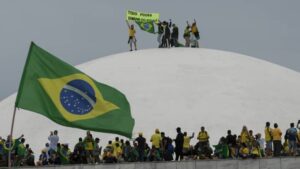 President Luiz Inacio Lula da Silva fired Brazil’s army chief Saturday just days after the leftist leader openly said that some military members allowed the Jan. 8 uprising in the capital by far-right protesters. The official website of the Brazilian armed forces said Gen. Julio Cesar de Arruda had been removed as head of the army. He was replaced by Gen. Tomás Miguel Ribeiro Paiva, who was head of the Southeast Military Command. Lula, who did not comment publicly on the firing, met with Defense Minister Jose Mucio, chief of staff Rui Costa and the new army commander in Brasilia at the end of the day. Speaking to journalists afterward, Mucio said the Jan. 8 riots had caused “a fracture in the level of trust” in the army’s top levels and the government decided a change was needed. In recent weeks, Lula targeted the military with criticism after supporters of former President Jair Bolsonaro stormed through government buildings and destroyed public property in an attempt to keep Bolsonaro in office. The uprising underlined the polarization in Brazil between the left and the right. Lula said several times in public that there were definitely people in the army who allowed the rioting to occur, though he never cited Arruda.