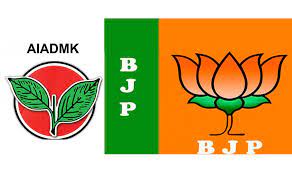 Chennai: BJP is likely to abstain from the election race and back the AIADMK in the February 27 Erode (East) Assembly bypoll to take on Congress candidate, E V K S Elangovan.

The bypoll got interesting with the faction led by expelled AIADMK leader O Panneerselvam deciding to contest the election and declaring its intention to claim the Two Leaves symbol.

With both OPS faction and the AIADMK of Edappadi K Palaniswami staking their claim for Two Leaves in the bypoll, the symbol faces the threat of being frozen for the third time.