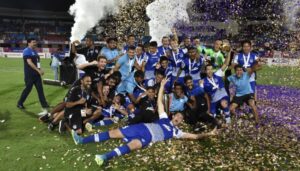 The 2022-23 Super Cup, featuring 16 teams in the Group Stage, will take place from April 8-25, 2023, in Kerala. Two of the three cities among Kochi, Kozhikode and Thiruvananthapuram will host the tournament. The qualifying round will kick off on April 3, as per a press release from the All India Football Federation (AIFF). All 11 teams from the Indian Super League and the champions of the 2022-23 I-League will get direct entry into the Group Stage of the Super Cup. Teams placed 2nd to 10th in the I-League will compete in the qualifying rounds for the four remaining group stage spots. In the qualifiers, I-League teams placed 9th and 10th will face each other in Qualifier 1, with the winner set to meet the 2nd-placed team in Qualifier 2. Along with the aforementioned fixtures, I-League teams placed between 3rd to 8th will face each other in a knockout format for the Qualifiers.