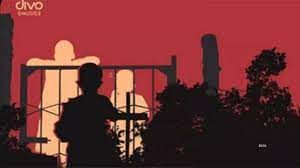 Thuneri, is a ghost movie with a difference. The film involves a group of children and proceeds in their view. Scary yet soft for it is for children.
It is bankrolled and directed by Sunil Dickson.  Navin Karthik, who was part of films like Sathuranga Vettai and Parijatham makes his debut as hero. He plays a honest and tough cop in the movie. Popular Malayalam actress Mia Sree plays the heroine. John Vijay dons the pivotal role of Karuppasamy in the movie.
Navin Karthik, a man of golden heart, is a honest police officer. He is posted to a village called Thuneri in Ooty. He along with his wife Miaa Sree and two children go there only to experience eerie moments. Blame falls on Karrupasamy’s soul. An angry man hated by village, he died a few years ago. The onus is on Navin Karthik to set things right.
Navin Karthik has done a decent job. He has action to do. He is a brainy and brawny cop. Miaa Sree does a good show. John Vijay in a different role tries to leave an expression.
Though a template horror film and there are cliches, yet Thuneri is watchable. Plenty of CG works too finds a place. Well begun is half done is what Thuneri is all about.
Tags: