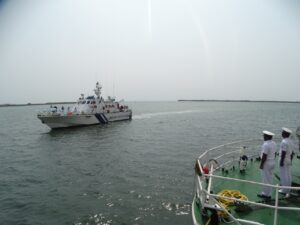 The boat is rebased at Karaikal and will give a major fillip to the ICG operations in the vast coastline of Tamilnadu and Puducherry.

ICGS C-436 has complement of one Officer and 12 enrolled personnel. The ship will be deployed in the Area of Responsibility (AoR) of ICG Station Karaikal.

ICGS C-436, Interceptor Boat (IB) is the 36th boat of its series and was commissioned at its base port Krishnapatnam by then Chief Secretary of Andhra Pradesh Dinesh Kumar on 5 January, 2018.

The Interceptor Boat is 27.63 meters in length and has been designed and built indigenously, a Defence release here said.

The Boat is fitted with state-of-the-art navigation and communication equipment.  The sensors and machineries are capable of operating in tropical sea conditions, close coast surveillance.

The boat is designed to carry one high speed inflatable boat for boarding operation, Search and Rescue, Law Enforcement and Maritime Patrol, it added.