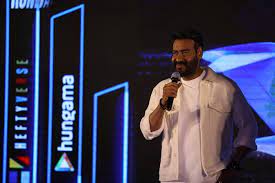 Chennai: HeftyVerse, a Web 3.0 initiative by Hungama, has joined hands with actor Ajay Devgn to launch the Runway 34 game in the metaverse.

Themed around the highly-anticipated film releasing on 29 April, the game was launched at an event attended by Devgn and Neeraj Roy, founder of Hungama and the HeftyVerse.

The announcement is the second between Ajay Devgn and the HeftyVerse that presents the actor in a never-before-seen metaverse avatar, it said. Earlier this March, he stepped into this universe as his character inspired by his OTT Series Rudra.

‘Available on HeftyVerse.xyz, the game will indulge users in an immersive and exciting experience right from start-to-finish. Bringing cinephiles and gamers together, users, as Ajay’s co-pilot, will attempt to make a safe emergency landing,’ said a statement.

Tags:a Web 3.0 initiative by Hungamahas joined hands with actor Ajay Devgn to launch the Runway 34 game in the metaverse.HeftyVerse