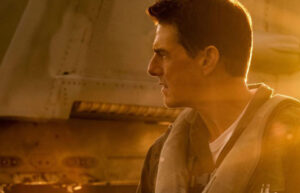 Top Gun: Maverick, an action drama film directed by Joseph Kosinski, is a Tom Cruise show all the way.

The much-awaited movie sees Maverick in an all-new avatar as an instructor at Top Gun as he takes a group of skilled graduates under his wing to train them for a specialized mission.

Among the group of youngsters is Lieutenant Bradley ‘Rooster’ Bradshaw, played by Miles Teller who is the son of Maverick’s late best friend, Nick ‘Goose’ Bradshaw.

Maverick must train the group for one of the most dangerous missions and must also teach them to work together as a team.

The group must embark on a special mission against a hostile mountainous nation that is gearing up to make facilities for enriched uranium, which they plan to use against the United States.

Be it action, romance or emotion, Tom Cruise is right there delivering his best. He is charming and his screen presence deserve a special mention. Jennifer Connelly as Pency is good.

While all other gave their best, the movie stands tall thanks to close to reality, the aerial sequences within F18s and F 14s. A job well-done.