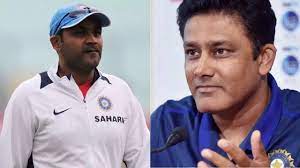 Mumbai : Former Indian batter Virender Sehwag says he owes big time to Anil Kumble for reviving his Test career after he was dropped for one year from the team. Sehwag was hurt and felt he would have scored over 10,000 runs had he not been dropped. He finished with 8,586 Test runs at an average of almost 50 and strike of 75+.

Suddenly, I realised I was not part of the Test side; it hurt, Sehwag said on of Home of Heroes on Sports18.

I would have ended with 10,000+ Test runs had I not been dropped for that period.

It was captain Anil Kumble who picked and took him to Australia for the 2007-08 Border-Gavaskar Trophy and this decision raised many eyebrows. It was a decision Kumble took on his gut.

Sehwag was not played in the 1st and 2nd Test. However, in the 3rd Test, he was given a chance by Kumble.

But that chance was also earned by Sehwag. Before the 3rd Test in Perth, India were to play a practice game vs ACT Invitation XI and Sehwag was told by Kumble that a fifty in this game will guarantee his place in the playing XI.