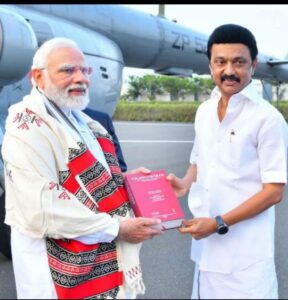 Speaking after inaugurating new completed projects and laying foundation stone for fresh schemes in road, railway and housing sectors, Modi said, ‘To boost the economic growth of the country and with a vision to make Chennai Port a hub of economic development, foundation stone for multi-modal logistic park in the city has been laid today. Our government is committed to develop such parks in other parts of the country’.
Sri Lanka is going through difficult times. I am sure you all are concerned about it. As a close friend and neighbour of Sri Lanka, India is providing financial support, food, medicines and other essential items to the country, he said.
The Banglore-Chennai Expressway will connect two key centers of growth. The four-lane elevated road connecting Chennai Port to Maduravoyal will make Chennai Port more efficient and will decongest city traffic, he added.
The event was attended by Governor RN Ravi, Chief Minister MK Stalin and Union Minister L Murugan among others.
Tags:Modi Tamil Chennai