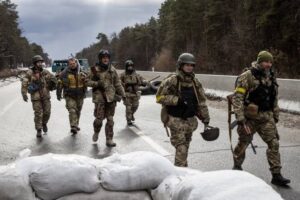 Ukraine sought more help from the West pleading for faster deliveries of weapons to hold off better-armed Russian forces and for humanitarian support to combat deadly diseases.

In Sievierodonetsk, the small city that has become the focus of Russia`s advance in eastern Ukraine and one of the bloodiest flashpoints in a war well into its fourth month, further heavy fighting was reported.

To the south, the mayor of Mariupol – reduced to ruins by a Russian siege – said sanitation systems were broken and corpses were rotting in the streets.

“There is an outbreak of dysentery and cholera … The war which took over 20,000 residents … unfortunately, with these infection outbreaks, will claim thousands more Mariupolites,” he told national television.