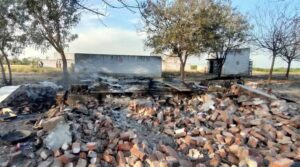 A middle-aged woman succumbed to injuries today at a hospital in Cuddalore where she was admitted in serious condition following a cracker unit blast. She was identified as Vasanthi, a worker at the unit.

The Chief Minister also directed the health care authorities to provide the best treatment to those injured.

Stalin announced a solatium of Rs 3 lakh each to the families of the deceased.